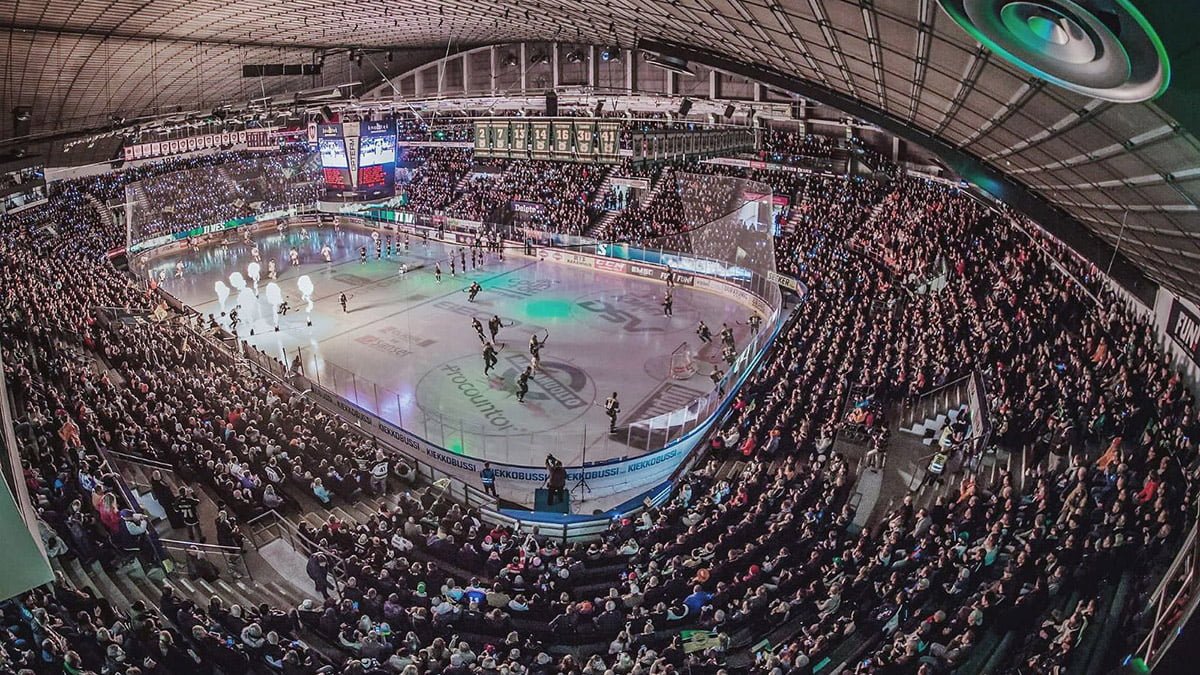 At the beginning of the 1960s, Tampere saw the rise of a strong citizens’ movement in favour of an ice arena in Tampere. The conditions of the Koulukatu artificial ice rink were unsatisfactory to the clubs and spectators alike. The final impetus for building the ice arena was provided by the 1965 Ice Hockey World Championships, which were to take place in Finland. Since Helsinki’s arena project did not progress, Tampere decided to take action.

The decision was made to build the ice arena in Hakametsä, which provided better transport connections. The arena was designed by architect Jaakko Tähtinen, with the lighting plans made by engineer Kalle Havulinna, who had played ice hockey in the national team. The construction of the ice arena cost approximately €1.2 million in modern money. Initially, it had room for 10,200 spectators. Only the eastern side of the arena had seats (for 1,573 people). There were 16 openings from the corridor to the stands. The rink was built about three metres below ground level.

Hakametsä was opened on 29 January 1965 with a match between Tampere and the rest of Finland, which ended 4–4. Hakametsä’s first Finnish Championship Series match was played two days later, Ilves beating Tappara with a score of 5–3.

The biggest renovations in the arena took place in 1981, 1990, 2001 and 2002. Today, Hakametsä can accommodate 7,300 spectators. There are 5,629 seats, 312 box seats and standing room for 1,359 people. Significant changes have included the video screen, the gallery section on the western side, the increase in the number of box seats and the extension of the stands closer to the rink.

When arriving from Pori, Rauma or Vaasa, signs to Tampere will guide you to Paasikiventie road by Lake Näsijärvi. Drive along the road and into the tunnel. After the tunnel, the name of the road changes to Kekkosentie. Drive on for about three kilometres, until you see the ice arena on the left.

If you arrive from Jyväskylä or Lahti, the easiest way is to drive in the direction of the Tampere sign with a hospital symbol, to Teiskontie road. Drive along Teiskontie for about four kilometres and, once you reach Tampere University Hospital, turn left to Kissanmaa. This road will take you directly to the ice arena.

If you arrive from Helsinki or Turku along the National Road, take the exit at Lakalaiva in the direction of Jyväskylä. Drive along this motorway for about five kilometres and, after the underpass, turn in the direction of the Kaleva sign. Drive along Hervannan Valtaväylä road towards the district of Kaleva for about two kilometres, until you see the ice arena on the right.

You can find your way to the Hakametsä Ice Arena using, for example, the Google Maps service (enter “Keltinkatu 2, Tampere” as the destination).

Paid parking begins two hours before the match. Parking is controlled by the City of Tampere Parking Control during the match. Read more about parking here. 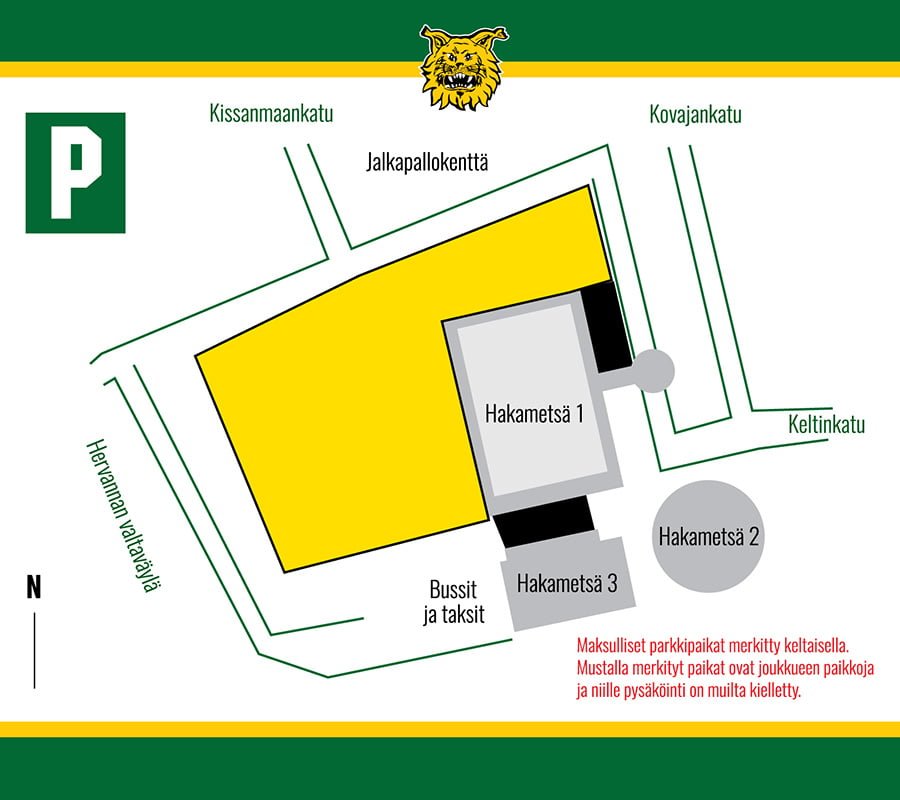 Bus timetables can be found on the Matkahuolto website.

Tampere Bus Station is located right next to the city centre, near the Koskikeskus and Ratina shopping centres and Ratina Stadium. From the bus station, you can get on a bus to the ice arena by walking past Koskikeskus to the main street, Hämeenkatu.

– If you are on foot, turn slightly right to Sammonkatu street.
– If you are driving, you can also turn slightly left to Teiskontie street. Via Teiskontie street, you can get to the ice arena by turning right before the bridge and driving down to Kekkosentie road in the direction of Hervanta, or by turning right to Kissanmaankatu street when you reach Tampere University Hospital.

In Tampere, there are taxi stations at the railway station, bus station and Keskustori square, for example. The ice arena has a taxi station at the D1 corner section.