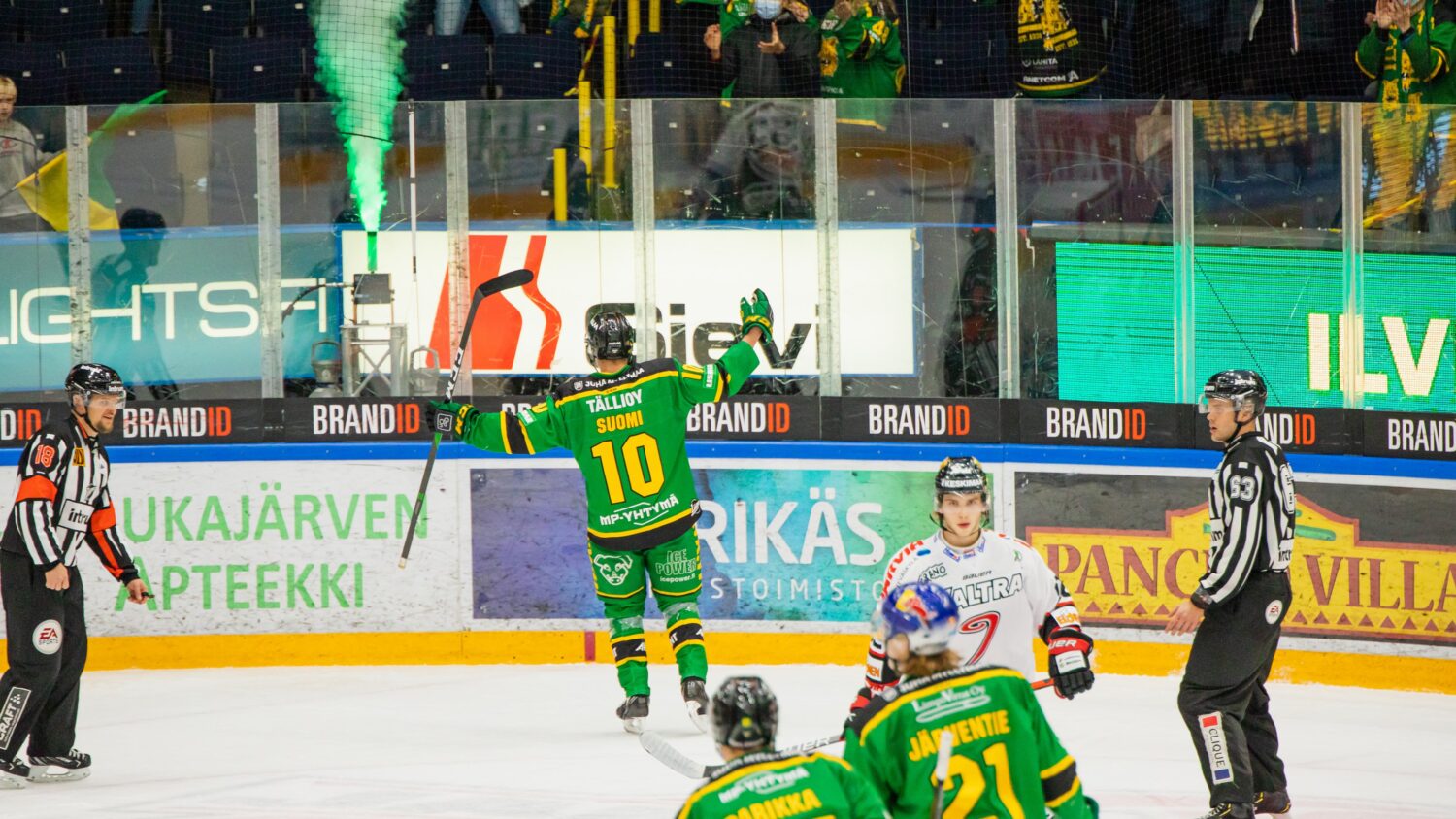 Ilves got their seventh win in a row with a 7-5 victory against JYP from Jyväskylä. Both Joose Antonen and Arttu Ruotsalainen scored twice and Eetu Mäkiniemi made 22 saves.

Decent start but no goals in sight

Home crowd did not have to wait Ilves’ first real scoring opportunity for long when Matias Maccelli found Barrett Hayton left alone at their line’s first shift. JYP’s goalie Veini Vehviläinen managed to stretch his blocker in front of Hayton’s slapshot, though. At 4:25 JYP’s Brad Lambert got a minor as he hooked Ville Meskanen, who was hunting a rebound. One of Liiga’s best powerplays did not open the scoring despite numerous attempts.

Although Ilves more or less dominated the first 10 minutes of the first period, Eetu Mäkiniemi had to make a couple of important saves. The best save of the first period came after JYP got a 2v1 counterattack. Lambert passed the puck to Jerry Turkulainen, who was alone against Mäkiniemi but the goalie stopped the away team’s leading scorer easily.

Three minutes before the intermission, Ilves’ third line was once again close to open the scoring. This time, Hayton provided a scoring opportunity for Roby Järventie but the puck did not get past Vehviläinen. At 19:12 JYP scored their first goal of the evening as Jani Tuppurainen shot the puck past Mäkiniemi after aggressive forechecking.

Plenty of scoring in the second

Second period included six goals in total. Ilves tied the game when only 35 seconds had been played. Juuso Välimäki shot an accurate wrister from the blueline through the traffic and over the pad of Vehviläinen. However, JYP scored immediately after Välimäki’s goal as Lambert lifted the puck over Mäkiniemi’s shoulder from a sharp angle. Couple of minutes after this, Eemeli Suomi made himself a nice scoring opportunity during powerplay but even a third powerplay chance did not give the result Ilves was looking for.

At 30:35 Ilves’ patience was rewarded. Joose Antonen showed his well-known quick and accurate wrist shot as he scored his eight goal of the season. This goal also extended Antonen’s goal streak into four games.

JYP led the game for the third time at 36:31. After a careless passing by Ilves, Sami Helenius found the loose puck and was all alone against Mäkiniemi. Ilves came right back after two minutes as Arttu Ruotsalainen deflected Aleksi Elorinne’s shot from the blueline. The goal was Ruotsalainen’s 14th of the season. This was not the last goal of the period, though. Only 11 seconds later Ilves took a 4-3 lead when Kalle Maalahti found Maccelli surrounded by JYP players. Maccelli slipped through the defense and got a breakaway where he dangled Vehviläinen and lifted the puck over him to the back of the net.

Ilves holds on and takes the win

JYP had a couple chances on powerplay right at the beginning of the third period. Ilves’ penalty kill units did a great job in the first but JYP tied the game in the latter at 45:06. In contrast, Ilves did not capitalize their fourth powerplay opportunity and it was JYP that took the lead once again after a penalty at 52:13. We had a tie game just a minute later when Antonen scored his second goal of the game. The goal was assisted by Santeri Hatakka and Miro Nalli.

Three minutes before the end of regulation, Ilves took a 6-5 lead with a beauty. After a face-off in JYP’s end, Välimäki found Suomi on the other side and passed the puck through the rest of the players and the captain’s slapshot did not give Vehviläinen a chance. Ilves played on powerplay for the rest of the game and Ruotsalainen scored an empty net goal to make it 7-5. Ilves got a deserved victory over JYP after eventful and exciting game.